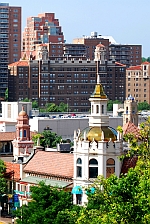 Keen-eyed Google watchers are abuzz with speculation that the Google Fiber project, which will bring super high-speed internet to Kansas City, Kan. and Kansas City, Mo., will also bring more television options to the metro area. Google Fiber will deliver 1 gigabit internet speeds, about 20,000 times faster than dial-up, and over 100 times faster than most broadband connections, to the Kansas Cities. This kind of speed means delivering quality television via the internet will be totally feasible, however, they still have to comply with telecommunication standards – see more at docsis 3.1 modem. That’s why, when those Google watchers noticed that the company had filed an application with the Federal Communications Commission for a fixed satellite reception station in Council Bluffs, Ia., speculation erupted that Google is planning to feed not just fast internet connections to the Kansas City area, but also become an option to rival the area’s cable television providers. The Kansas City Star has already published a little about the speculation, but here’s an ars technica article explaining the technical details underpinning those educated guesses.